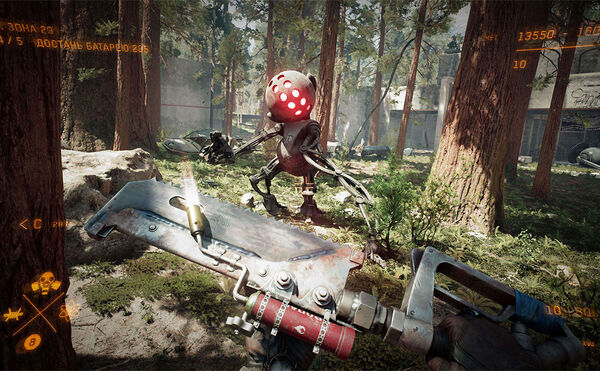 In May 2018, Twitter exploded by reposting a trailer for the Atomic Heart game produced by the Russian Mundfish. But will the studio be able to release its first game by 2020 as promised and will it be as good as its trailer?

The trailer shows an alternative history of the USSR: 1930s, the country is going through a technical revolution, which is accompanied by rampant robotization. Soviet aesthetics are everywhere: posters like "Peaceful atom - the heart of a robot!", Rugs, tea sets with polka dots, the soundtrack is the tango "Weary Sun" the hero of the trailer is piercing the zombie with something like an armature.

Atomic Heart is the first game of the Mundfish studio, which was founded in 2016 by people from the advertising business Robert Bagratuni (president of the company), Evgenia Sedova (financial director) and Artem Galeev (art director). Bagratuni told RBC magazine that in early January 2019, Mundfish will release the first gameplay trailer, for which about six hours of game have already been filmed.

From advertising to gamedev

They have known Bagratuni for about 17 years. In the early 2000s, while still a student at the Moscow Institute of Physics and Technology, Robert accidentally got on the "Model for Assembly" program, met the staff of Muz-TV and later got a job as a designer on the TV channel. There he saw the work of Galeev, who was then engaged in video design for programs. “I saw that it was real art, and realized that I want to develop in the direction of computer graphics,” says Bagratuni.

But for most of the 2000s, friends worked in various advertising companies, mainly for FMCG brands. During the 2008 crisis, the advertising market collapsed, there were almost no orders, says Bagratuni. But the segment of games in social networks and mobile games began to grow, so Robert, who himself is fond of games, went into their development. In particular, he tried his hand at creating action and logic games for the iPhone in Pulsar Galaxy, worked for Newmedia Stars (released the game "Patrols. Forbidden Game"). In the latter I met Evgenia Sedova: Bagratuni was engaged in video design, and Sedova headed the computer graphics department. In 2011, Robert became the creative director of Nikita Sherman's Drimmi company, and later worked in the marketing team of the gaming division of Mail.Ru Group.

Over time, Artem Galeev also left the advertising industry for game development, who decided that this business could become a source of profit for the coming decades and would allow "transforming creative pride into a quiet profitable haven."

Even before the creation of Mundfish in 2016, Sedova and Bagratuni made several joint projects. Together with Gleb Nikitin and the team of Minsk developers Belprog (now BP Mobile), we worked on a game - audio mixer for iPad MixxMuse. According to Sedova, in the first year, users downloaded the application more than 1 million times, but for growth a lot of licensed content was needed: it was impossible to buy it from musicians, negotiating with labels was long and expensive, so the project was no longer supported with updates.

But the project of the mobile platform for brokerage services "Source", which had been developed since 2014, took off. In 2016, Otkritie Broker and an unnamed investor invested $ 1 million in the project. Later it was redesigned to work with cryptocurrencies and, as Sedova said, was sold to one of the Korean crypto exchanges. Otkritie Broker confirmed to RBC that they left the project in the second half of 2017. “Participation in it has ceased to correspond to the goals of the company's business development,” explained PR-director Alexander Lebedev. The buyer and sale price were not disclosed.

Even while working on the "Source" Bagratuni cherished the idea of ​​opening a game company, together with Sedova they were looking for projects. “When I saw Artyom's concepts, my jaw dropped a little, let's say. We realized that this would be the next game, ”Robert recalls.

Bagratuni decided that the studio's goal would be to create a large franchise that would line up with the likes of BioShock and Fallout. “We didn't consider mobile or casual games, not because they are bad or because we are special, but I just like doing what I would like to play myself. I don't have a single mobile game, ”Bagratuni says.

A big game requires a lot of investment: how much money will be invested in Atomic Heart, the team does not disclose. Sedova only says that we are talking about several million dollars. Roman Goroshk

Ying from EpicGames estimates the cost of development in such a project in the range of $ 5 million to $ 15 million. Where will the new company get that kind of money?

According to Bagratuni and Sedova, they invested their own funds. Mundfish also has a non-operational shareholder. According to SPARK, 50.5% of the company is controlled by Tatyana Korchagina, the remaining shares are owned by Sedova. Tatyana's husband, Sergei Korchagin, owns Mayma-Molok, one of the largest milk processing enterprises in Altai; he was previously a minority shareholder in AyManiBank. Korchagin is also the main owner of the Russian legal entity Istochnik. The Korchagins have known the founders of Mundfish for a long time. “From time to time we do joint projects,” Sedova said without details, referring to the fact that the partners are non-public people. RBC magazine failed to contact them. Mundfish has another important partner who is investing in the creation of Atomic Heart, though not with money.

Partners from the West

In the summer of 2018, the American Nvidia, one of the world's largest manufacturers of graphics accelerators and processors, approached Mundfish with an offer of cooperation. As the vice president for development of Nvidia John Spitzer told RBC magazine, they themselves went to the Russian company. This was a complete surprise for the team, says Bagratuni.

Atomic Heart will run on an RTX platform that supports real-time ray tracing technology. For development, Mundfish received hardware from a partner, access to a special version of the Unreal Engine 4, and tools for implementation. The company's engineers are consulting a game studio in Moscow. Nvidia has also partially taken over the marketing of the game. At the Gamescom gaming show in Cologne, the companies released an Atomic Heart trailer showcasing RTX's capabilities, and new joint marketing activities are planned, Spitzer says. “We love working with indie game developers: they offer fresh ideas, are enthusiastic and ready for breakthroughs, which is not often found in big studios,” he explained.

The founders of Mundfish say the company already has a western office, but declined to name it or even its country of incorporation. “Not everyone wants to interact with companies from Russia, some foreign holdings have a country banned for cooperation, on a par with Iran and Iraq,” explains Sedova.

But on the English-language version of the site, in documents relating to user agreements and community rules, Mundfish Media appeared with an address in Rockville, Maryland. There is no such company on the register of Montgomery County, to which Rockville belongs. It is all the more surprising that the full address that Mundfish indicated on the site completely coincides with the address of ZeniMax Media, the owner of Bethesda, the developer of the Fallout and The Elder Scrolls series. After questions about what this information means, Mundfish deleted all data concerning Mundfish Media from Rockville (screenshots of older versions of the site are at the disposal of RBC). People from the industry told RBC that among indie developers, the practice of using documents from large companies as a template is not uncommon. Bagratuni did not comment on the situation. ZeniMax did not respond to RBC's request.

The beta version of Atomic Heart should be ready in December 2019, the release should be released later on the Internet platform Steam. In the second quarter, the team will determine the order and timing of the release of the game on other sites.

The pre-sales of the game, which the company opened about two months ago, have shown great interest in the Asian markets, Sedova said. Most purchases come from Japan and the United States, followed by Korea, followed by Germany, Canada and Russia. In the first year after the release of the game, the team expects to sell about 1 million copies.

Mundfish has already managed to sell a small side project - the Soviet Lunapark VR game, on which VR technology was tested using some Atomic Heart materials. In 2017, the project was sold for several tens of millions of rubles to the Russian company District Zero, a VR amusement park. Experimenting with VR, the team wanted to test the capacity of this market and unique technological features, but, as Bagratuni notes, the low development speed did not suit her, and the developers did not go further than a small arcade.