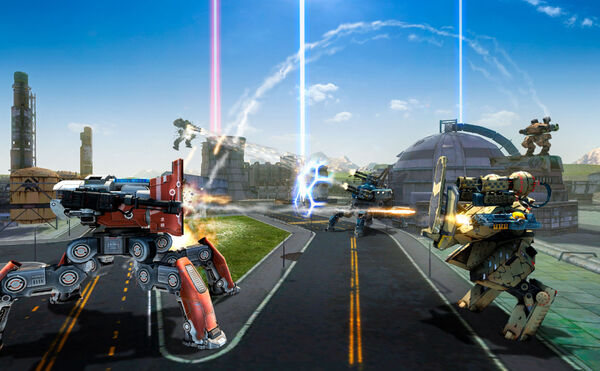 Pixonic is an example of a successful startup in the game development industry, which, thanks to the success of the mobile game War Robots, was acquired by the Mail.Ru Group. How the project lives in new realities and where it looks for opportunities for growth

Pixonic, a game developer and publisher, was founded in 2009 by serial entrepreneur Elena Masolova. Her projects include coupon Darberry (acquired by Groupon in 2010), business education service Eduson.tv and others. Masolova also co-founded the AddVenture II foundation, where Pixonic was born.

In 2013, the studio released its main hit - the robot fighting simulator War Robots. In 2016, when the app had over 20 million installs, Pixonic was acquired by Mail.Ru Group for $ 30 million. RBC magazine found out how the developer War Robots is developing after the deal.

Pixonic Strategic Director Nikita Guk gives an interview in a class A business center. At the tenth minute of the conversation, the electricity goes out in the entire building. “You can start a cool game development company, but you still have to fight the roof leaking in the kitchen,” the manager reacts with a laugh.

Pixonic, a "cool game development company", appeared on the market nine years ago, at the time of the rapid expansion of social networks. Development of projects for users of VKontakte, Facebook and other platforms seemed to be the most promising in the gaming industry. This is what a startup that attracted AddVenture II investments undertook to master.

The main hit of the first phase of Pixonic's development was Domovyata: a game about the life of a fairy forest was released in 2011. At the same time, the company was actively working as a publisher: in two years it released 30 games from 17 studios. In the same year, $ 5 million was invested in Pixonic by the funds Ventech, TA Ventures and Kite Ventures (another investor later became the co-founder of QIWI Andrey Romanenko). As Kommersant wrote, investors could get up to 50%. It was assumed that the money will go to publish games through the PixApi platform in social networks.

Time has made adjustments to Pixonic's strategy - mobile games were becoming the fastest growing segment. The studio reoriented itself in time and focused on a new direction. The first mobile project in December 2011 was a simulator of life on the uninhabited island of Robinson. According to Masolova, the game has been feeding experimental development at War Robots for two and a half years. At its peak, Domovyata brought in about $ 300 thousand a month, Guk recalls. Later, when "robots" became more popular, they easily bypassed the company's previous project and began to bring in more than $ 5 million.

Gaining the trust of audiences in a competitive market has proven challenging. Although War Robots quickly became a popular product, the model of cooperation with the App Store and Google Play did not allow the earned money to be quickly put into circulation: payments to developers were stretched for 60 days or longer, said Philip Gladkov, CEO of Pixonic, in an interview with Forbes. The British fund Pollen provided timely assistance: for a small percentage, it loaned the company for the amounts that were to come from Apple and Google.

This model allowed Pixonic to invest in marketing and advertising without operating risks. The emphasis was on the Google and Facebook platforms. The costs paid off: from August 2015 to March 2016, the number of War Robots users jumped by 300%.

Growth in gaming revenue also helped to mitigate the risk of a cash gap, Hooke said. When revenue from War Robots exceeded $ 5 million a month, Pixonic achieved financial stability. At the same time, the company cut marketing spending from 60 to 40% of its monthly income, the manager says.

The triumph of War Robots made Pixonic focus on the product all its efforts. As part of the paradigm shift, the company temporarily abandoned the development of other projects - developing its own games and releasing others as a publisher. “Pixonic's life depended on War Robots. If the project had not worked or had started to decline, the company would most likely have ceased to exist, ”Guk admits.

The negative scenario did not come true: War Robots continues to develop rapidly: in the last year alone, the game was downloaded by 50 million users (the same as in the previous three years combined). The app's daily audience has grown from 500 thousand to 1.5 million people in three years.

In 2016, Pixonic accepted the offer from Mail.Ru Group. For the holding, this was the first major investment in the industry (now the gaming direction unites ten studios, says the operating director of the holding Vla

Dimir Nikolsky). The amount of the transaction was $ 30 million: the shareholders received $ 20 million immediately, the rest of the payment depended on the implementation of KPI. For Pixonic's co-owners, the sale was profitable, Masolova recalls: AddVenture II, for example, invested $ 100,000 in the studio, and came out with $ 8.5 million.

Masolova was Pixonic's largest private shareholder at the time of the transaction. She considers the takeover a success for the company: "Many competitors who were making noise on the market did not find a buyer and were quietly blown away."

Within the holding, the studio remained an autonomous division, Hooke emphasizes. Today Pixonic has more than 200 employees in four offices in Russia and abroad (Moscow, Belgorod, Berlin, Limassol). The shareholder monitors the development of the studio through the board of directors, which is held once a quarter, says Nikolsky. No integration of Pixonic games with other projects of Mail.Ru Group is planned, the manager emphasizes. In 2016, Pixonic reported its last financial results. Revenue amounted to $ 22 million - almost five times more than a year earlier. Now Hooke reveals only the distribution of income by audience in different countries: 40% are brought by American users, 17% - by Japanese and only 3% - by Russian.

Two years after the deal with Mail.Ru Group, the Pixonic team is looking for new growth opportunities. One of them is an attempt to enter the Chinese market. Initially, the company hoped to gain popularity among users from the PRC in a year, but the deadline had to be pushed back. A big jackpot is at stake: the turnover of companies that are successful in China is hundreds of millions of dollars, the manager recalls.

“We have found a local partner, iDreamSky, to help with the licensing for the Android release. [In China] things are complicated: first, the National Radio and Television Administration issued the license, and since December, the online gaming ethics committee has been doing it, ”says Guk. Another problem is building a server cluster: in the PRC, even neighboring provinces can have low routing connectivity. According to Hooke, Pixonic initially tried to resolve the issue without the help of a local partner, but is now also working on a project in an alliance.

To assess how promising the market is, Pixonic's strategic director cites Finnish SuperCell, the creator of the mobile bestseller Clash of Clans. The company, which was acquired by the Chinese holding company Tencent in 2016, earned $ 2 billion in the PRC in 2017 and received $ 810 million in profit.

Another potential source of Pixonic's growth is its publishing resurgence. So far, this is an investment project, says Guk. Every month the company receives 15–20 applications from developers, but has not yet brought a single one to the global launch. But she lured into her state the most promising game creators from among those who asked for help.

Projects developed inside Pixonic have not yet gone beyond the soft launch stage - release without spending on advertising and marketing. There have been three or four such games in the past two years, says Hooke. In 2019, the global launch of the new game is still planned, he claims. “If by that time the metrics satisfy us, we will make a release, if not, we will look for [a new project] further,” the manager sums up.

With organized processes, a game created by a team of the level of Pixonic can show good results for five to seven years, says Nikolsky, COO of Mail.Ru Group: the studio staff have a lot of expertise and high professionalism, he concludes.