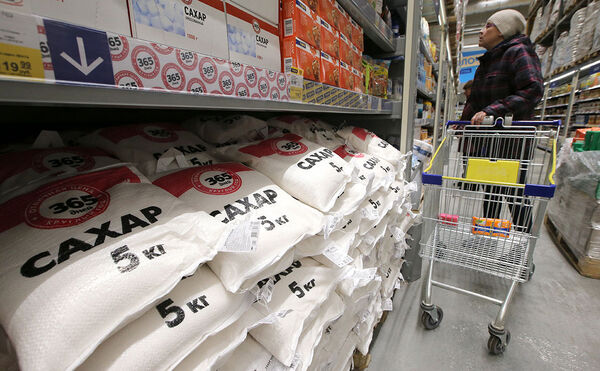 Wholesale prices for sugar began to rise in Russia

One of the largest sugar producers warned of a rise in wholesale prices amid expectations of a deficit. Due to the decrease in crops and beet yields, the prices for sugar in wholesale have more than doubled, but there will be enough sugar, experts say.

The increase in wholesale prices for sugar "in connection with the expectations of a shortage of sugar in Russia" was reported by the Rusagro group, the third largest producer of this product in the country. In the third quarter, the selling price of sugar from Rusagro increased by 14% compared to the same quarter last year - to 30.1 rubles. yes 1 kg without VAT.

Despite the rise in sugar prices, Rusagro's sugar business revenue decreased by 10% in the third quarter to RUB 6.8 billion. The reason was the decline in sugar sales, the report says.

Will there be enough sugar

Expectations of a shortage of sugar are associated with a reduction in the area under sugar beet crops and a decrease in yields, as well as with an increase in world prices in the fourth quarter, Rusagro CEO Maxim Basov told RBC.

Sugar production in Russia will be lower this year, the Union of Sugar Producers of Russia (Soyuzrossakhar) admits, although a shortage of products is not expected. Sowing of sugar beet has decreased, and the harvest this year in a number of producing regions will be lower due to unfavorable weather conditions, says the chairman of the board of Soyuzrossahar Andrey Bodin. According to his estimates, about 5.2 million tons of sugar will be produced from the 2020 sugar beet crop, while a record 7.7 million tons were produced from the last year's crop. But Bodin recalls that sugar production in Russia has been growing for several years in a row and by the beginning of the production season in August 2020, the country had the maximum historical reserves of sugar - about 2.9-3 million tons, which allow it to cover domestic consumption - Bodin estimates it at about 6 million tons. The situation will not reach a deficit, the Director General of the Institute for Business Conditions agrees agrarian market (IKAR) Dmitry Rylko: according to him, taking into account carryover stocks, Russia will be provided with sugar this year.

The decision to reduce the sowing of sugar beet in 2020 was made by the Ministry of Agriculture against the background of the fact that sugar production in the country exceeded consumption in 2016 and record stocks were formed in the country. Prices, meanwhile, were falling: in June 2019, wholesale sugar prices hit a five-year low. The sown area has decreased by 19% this year (according to Rosstat, 1.14 million hectares were sown under sugar beet in 2019, and this year - 928 thousand hectares), says Yevgeny Ivanov, a leading IKAR expert. But besides this, the entire vegetative period of sugar beet in the southern and central regions was unfavorable weather conditions: in spring - frosts, and in summer - drought. In addition, due to frosts and dry winds, there was a high proportion of overseeding, and as a result, the harvest per hectare will decrease by 23% this year. But even if Russia "in an unfavorable scenario" produces a little less than 5 million tons of sugar, then taking into account the reserves and production accumulated over five years in Belarus, sugar will be enough for everyone, says Ivanov. A slight shortage of sugar is possible by the end of the season - in the summer of 2021, Ivanov admits, but in this case, the balance is likely to be closed by the import of white sugar from Belarus, Kazakhstan and other CIS countries.

The price of sugar is rising

The expected decline in production nevertheless affected prices. As soon as it became clear that there would be no surplus of sugar this year and production would be at the level of self-sufficiency, prices began to rise, Rylko notes. The jump in prices compared to last year was in September and continued in October, Ivanov notes. According to IKAR, the wholesale price per kilogram of sugar in mid-October from producers was about 44 rubles. with VAT, while last year due to overproduction it was at “prohibitively low level for the industry” 20 rubles. for 1 kg.

The wholesale price for sugar reached 45 rubles. for 1 kg, Bodin agrees, but this price, in his words, is "economically justified", while in previous years the cost of sugar was "abnormally low", and in addition, this year the purchase price of sugar beet has increased from 2 thousand to 4–4.3 thousand rubles. per ton in October this year, the cost of its processing also increased. The fact that sugar production in Russia is on the verge of profitability was announced three years ago by the former Minister of Agriculture Alexander Tkachev. Amid falling sugar prices in the 2020/21 season, as reported by Soyuzrossahar, three sugar factories have decided not to reopen. Now sugar beet loses to other crops in terms of profitability, so we are talking about the need to maintain the price of sugar at a level that will encourage producers to grow it and allow processors to return investments, adds Bodin.

What is the Rusagro group known for?

Rusagro Group, which produces the brands Russian Sugar, Chaikofsky, Mon Cafe and Brownie, was the third largest sugar producer in Russia at the end of 2019 with a 12% share, gis listed in her annual report. Market leaders are Prodimex Group and Dominant Group. In addition to sugar, Rusagro produces meat, fat and oil and dairy products. The Group is the second largest producer of mayonnaise in Russia (brands Moskovsky Provencal, EZhK, Dream of the Hostess), is one of the five largest producers of pork and is the largest producer of crude sunflower oil in Russia. Rusagro's revenue in 2019 reached 132.8 billion rubles.