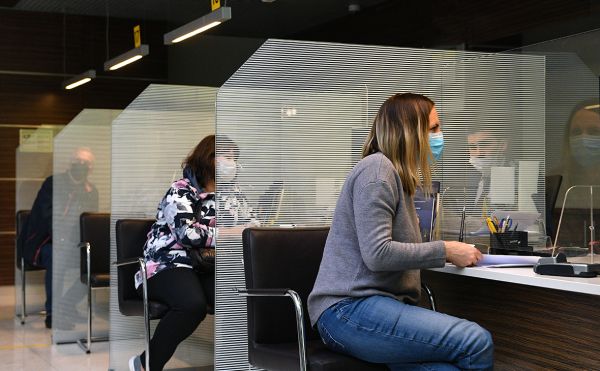 The deferred demand of the population for cash loans has been exhausted, the OKB reported. Banks in September issued 5% fewer new loans than in August. The situation could also be affected by the risks of the second wave of the pandemic

In Russia in September, for the first time since the crisis in April, a decline in the issuance of unsecured loans was recorded, follows from the statistics of the United Credit Bureau (OKB), which RBC got acquainted with. This is the only bureau that accumulates data from the country's largest bank, Sberbank.

Last month, Russian banks issued 1.34 million cash loans for 453.6 billion rubles: compared to August, the volume of issued loans fell by 3%, and their number - by 5%, in annual terms, issuances fell by 5 and 13% accordingly, follows from the data of the OKB. Since May, despite the pandemic still in effect in Russia, unsecured loans have recovered at a double-digit pace. In July-August, the volume of approved loans even returned to the pre-crisis level and exceeded the indicators of the same months of 2019 by 3-4%.

Cooling in the segment of unsecured loans was also recorded in the BKI Equifax. According to the bureau, the volume of their issuance in September remained practically at the level of August.

Why banks have cut down on cash loans

An important factor affecting lending at the beginning of autumn is seasonality, says Nadezhda Karavaeva, a senior analyst in bank ratings of the National Rating Agency (NRA): “After the August period of preparing Russians and their children for the beginning of the school year and the ending vacation period, September traditionally shows a decrease in population demand for loans ".

The seasonal factor really affected the issue, but it was not the only one, explains Artur Aleksandrovich, General Director of the Design Bureau. According to him, the decline in loans issued in September is partly due to the fact that lending ceased to support the effect of deferred demand - it was exhausted in July-August.

“Lack of growth, on the one hand, may mean that the deferred demand [for unsecured loans], which has been a driver of growth in recent months, is satisfied and is no longer a driver,” agrees Oleg Lagutkin, CEO of BKI Equifax. He also draws attention to the fact that in recent months, banks, "albeit reluctantly", have reduced interest rates on loans following the key rate of the Central Bank. And in September, the Bank of Russia left the rate at the same level, and this could affect the issuance, Lagutkin admits.

The stabilization of the economic situation in the summer could indeed be a temporary factor in supporting the demand for loans, says Anton Lopatin, director of the analytical group for financial institutions at Fitch. “But banks are still more conservative in terms of issuances than they were before the pandemic, since household incomes are not growing, and in general, macroeconomic risks remain significant,” he adds.

The dynamics of issued loans is influenced not only by demand, but also by the willingness of banks to take risks, agrees Ivan Uklein, Director for Banking Ratings at Expert RA. However, he reminds that in the fourth quarter there is a traditional acceleration of banking retail on the eve of the holidays. "There is no need to talk about a complete halt in the growth of unsecured loans to individuals, much will depend on the situation with the virus in the last quarter," the expert concludes.

How the second wave of the pandemic will affect lending

Since the end of September, an increase in cases of COVID-19 infection has been observed in Russia: against this background, the authorities of Moscow and other regions recommended that citizens and businesses return to some restrictions that were adopted in the spring, at the peak of the first wave of the coronavirus pandemic (for example, re-transfer 30% of employees to a remote work).

“If a strict spring quarantine is introduced, then the drop in loan issuance month on month may be quite comparable to April of this year,” emphasizes Alexey Volkov, Marketing Director of the National Bureau of Credit Histories (NBCH). He recalls that compared to March, the segment of unsecured loans in April decreased by 54%, and the segment of credit cards - by 57%. But so far the situation with restrictions is different from what it was in the spring, reminds the NBCH top manager.

According to the Central Bank, in April, the portfolio of unsecured loans from Russian banks decreased for the first time since 2017. Prior to that, retail lending growth rates were double-digit in 2018–2019 and worried the Bank of Russia due to the risk of market overheating.

In conditions of uncertainty, lending growth will be restrained for now, but everything may change in November and December, Lagutkin said. At least the largest private and state banks will demonstrate an increase in lending volumes to meet KPIs, he explains.

Lending volumes traditionally grow in the fourth quarter, but this time due to rice

In the second wave of the pandemic, the banks' policy may be seriously corrected, Aleksandrovich believes. “Banks will increase competition for granting loans to the most reliable borrowers - with a good credit history and transparent stable income,” the expert concludes.

How banks see the situation

Most of the banks surveyed by RBC do not observe a slowdown in the issuance of unsecured loans. The growth in the volume of approved loans in September, in particular, was recorded in Gazprombank, Promsvyazbank, Raiffeisenbank, Post Bank and Bank Zenit. A representative of VTB said that last month's issues were comparable to August, Rosbank “did not notice a decline” compared to the previous month. The rest of the top 15 banks did not respond to RBC's request.

“Sufficiently low interest rates and traditional seasonality typical for the end of the year, in our opinion, will play in a positive direction, and by the end of 2020 the market will be able to avoid negative sales dynamics,” says a VTB representative.

The end of the year is traditionally a high season in consumer lending, agrees Andrey Tochenyi, director of the retail lending department at Promsvyazbank. However, he does not exclude a negative impact on the issuance of the second wave of the pandemic and severe restrictions.