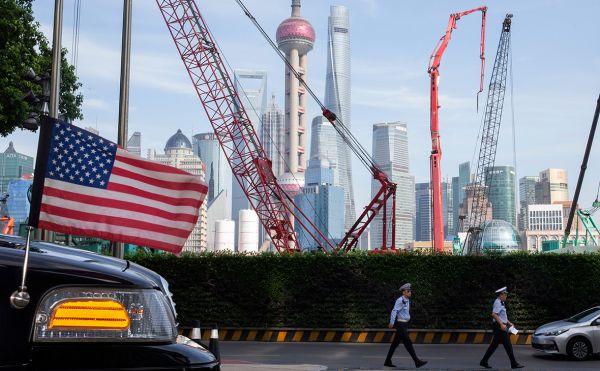 The consequences of the confrontation between the United States and China pose a new economic threat to Moscow, the RIAC warns. The main risk factor is increased pressure on the global commodity market due to the slowdown in the growth of the Chinese economy

If the confrontation between the two powers gains momentum, then this carries risks for global stability and poses a potential economic threat to Russia. This is stated in the analytical report of the Russian International Affairs Council (RIAC; is at the disposal of RBC).

The sanctions pressure of the United States and the European Union on Russia went almost unnoticed from the point of view of the global economic system, but the consequences of the confrontation between the two largest economies in the world pose a serious problem for Moscow, the authors warn. The main risk factor is increased pressure on the global commodity market due to the slowdown in the growth of the Chinese economy, according to the RIAC. "This is fraught not only with a reduction in budget revenues and resources for development [...], but also with an increase in the volatility of the ruble exchange rate, which in early 2020 has already shown one of the lowest degrees of resistance among world currencies to negative impulses from world markets," noted in the report. In particular, the fall in world prices for raw materials may hit the payback of projects such as the Power of Siberia gas pipeline, explains the author of the report, Sergei Afontsev.

The aggravation of the conflict between the United States and China can also lead to an outflow of capital from emerging markets. Since the beginning of the year, the ruble has become the least stable emerging market currency after the Turkish lira, falling 15% versus the dollar.

The confrontation between China and the United States will develop simultaneously in several directions, which will affect the world economy in several aspects, the RIAC report says.

Geopolitically motivated regulatory measures can lead to reduced trade and investment cooperation and disruptions to the value chains formed by US and Chinese companies.

The contradictions will create negative indirect economic and sanctions consequences affecting the economies of third countries cooperating with the United States or China.

Changes in the growth rates of the two largest economies in the world amid growing contradictions will affect the dynamics of prices for major exchange commodities, including oil.

For the Russian economy, cooperation with the PRC is very important. In particular, the negative effects of the confrontation between the United States and Russia can be partially offset by the development of cooperation with Chinese companies, primarily in the technology sector, Afontsev believes. Moreover, Chinese companies themselves are interested in expanding the circle of partners as the US pressure grows. But the development of Russian-Chinese cooperation is hindered by a number of factors. First, Russian manufacturers feel threatened by Chinese companies focused on serving the Russian market and integrating local partners into their value chains. Secondly, the circle of Russian companies, cooperation with which is of potential interest to the Chinese, is rather narrow. Third, sanctions threats can impede closer cooperation. “In these conditions, the negative effects of the confrontation between the US and China for the Russian economy, with a high degree of probability, will prevail over the positive ones, although their net contribution to the slowdown in Russian GDP growth is unlikely to exceed 0.2-0.3%,” Afontsev concludes.

Will the change of administration weaken the confrontation

US President Donald Trump criticizes China for unfair competition and stealing intellectual property from the United States. Since 2018, Washington has introduced all new duties on Chinese goods. Some of them were removed in January, when the two countries agreed on a deal obliging Beijing to buy $ 200 billion worth of agricultural products and other goods from the United States within two years. In exchange, Washington canceled a planned increase in duties on Chinese products, including phones, toys and laptops. ... The deal was called into question due to the actions of the central authorities of the PRC in relation to Hong Kong, after which Trump announced the introduction of additional sanctions against Beijing.

As for the trade deficit of the United States and China, which Trump promised to eliminate, in the first years of his presidency, this figure rose to $ 380 billion in 2017-2018. The deficit fell to $ 308 billion in 2019, according to data from the US Department of Commerce.

This confrontation will continue regardless of the outcome of the November presidential elections in the United States, according to an analytical note by experts from the rating agency Moody's (RBC has it). According to analysts, Trump's rival, Democratic candidate Joe Biden, does not differ from the Republican in the content of his policy towards Beijing. In particular, Biden criticizes China for violating human rights and stealing intellectual property; in addition, he pledged to take steps to reclaim jobs lost in the trade war.

The PRC will be the main loser of the conflict, as the curtailment of ties with a leading trading partner, which accounts for about a fifth of exports, will affect the country's economic growth prospects, the RIAC report says. The US economy, however, will also suffer, given the investments of US companies in China. According to Oxford Economics estimates, as of 2015, economic ties with the PRC provided jobs for more than 2.55 million Americans, with 1.48 million people being employed by exporting goods to the PRC.

Private conflict as a reflection of a general trend

The US-China trade confrontation is just one sign of growing barriers to global trade, the RIAC believes. If we calculate the cost of all goods from third countries subject to the duties of the G20 members, then in November 2018 this figure was $ 481 billion, a record. In June 2020, it dropped to $ 418 billion (according to the WTO). The total volume of trade, which is subject to the restrictions against imports introduced since 2009 by the G20, in 2019 amounted to $ 1.57 trillion, or about 8% of world trade in goods. Less than 47% of this amount is accounted for by US-China trade.