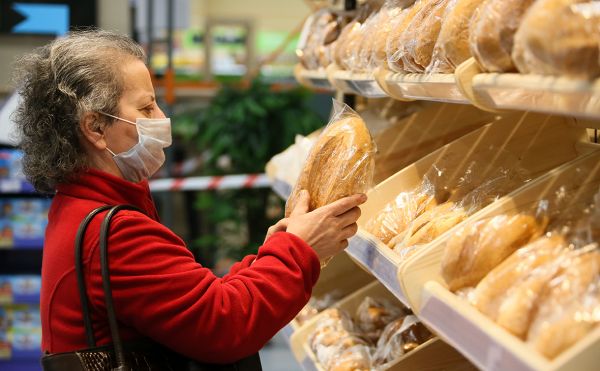 GfK analysts recorded a decline in sales of ready-made bread

During self-isolation, Russians began to bake more at home: according to the research company GfK, purchases of flour and yeast increased in spring and summer, bread, on the contrary, decreased

One of the products, the consumption of which changed during the pandemic, turned out to be bread, according to a presentation by RBC research company GfK on consumer behavior during the pandemic. GfK estimates the changes based on data from its consumer panel, in which more than 20 thousand families throughout Russia record their daily purchases.

In April of this year, when most of the residents of Moscow and other large cities found themselves in self-isolation at home, and catering establishments could only operate takeout and delivery, researchers recorded a 5% decrease in sales of ready-made bread in retail compared to April 2019. At the same time, in quarantine, Russians bought more flour, yeast and other ingredients in order to bake baked goods on their own. Purchases of flour then increased by 8% compared to the same period last year, yeast - by 12%.

A decrease in demand for bread and an increase in purchases of ingredients for baking were also recorded during the previous crisis in 2014, says Elena Samodurova, director of the consumer panel department at GfK Rus. On the one hand, consumers think that cooking at home saves money, on the other hand, this time there was no access to catering establishments. People were less likely to go shopping for fear of infection, and instead of traditional bread, they made other baked goods at home, explains GfK.

But this trend continued after the restrictions were lifted, says GfK. In July 2020, purchases of bread were 3% lower than a year earlier, purchases of flour increased by 9% (on average, they bought 3.5 kg per month), yeast - by 19% (74 g).

The fact that people are more likely to bake at home on their own is confirmed by the increase in demand for kitchen appliances: sales of bread makers began to grow in March this year. In April, the growth in sales in annual terms, according to the audit of non-food retail, which also deals with GfK, amounted to 78%, in May - 73%. In the summer, bread machines were also in demand, although the growth rates slowed down significantly.

The online retailer Ozon also drew attention to the sharp - by 310% - growth in sales of bread machines. The demand for them was mainly in April-May, and in the summer months the growth of their sales was comparable to that of other kitchen appliances, the press service of M.Video-Eldorado specifies.

What bakers and retail chains say

Industrial manufacturers of bakery products did not notice a decrease in demand during self-isolation, but buyers really began to cook homemade cakes more often and took more flour and yeast, agrees the chairman of the board of directors of the National Union of Bakery, head of the board of directors of the Cheryomushki confectionery and bakery plant Sergey Shchedrin. Increased consumer demand for flour compared to last year remains today, although it is weaker than it was in April, Shchedrin adds.

Ashan reported a slight decrease in bread sales and an increased demand for flour and yeast: in March-May 2020, sales of flour increased by an average of 27%, yeast - by 15%, but the peak of purchases, according to the network, fell on March ... Since June, the demand for these products began to fall.

Official statistics did not record a drop in sales of bread and bakery products in the first half of the year. In January-June, growth in monetary terms was, according to Rosstat, 2.3%, to 351.5 billion rubles. During the same period, flour sales increased by almost 7% to RUB 60.5 billion.

Earlier, Rosstat noted that, in general, bread consumption is falling: in 2018, the average resident of Russia ate 68.5 kg of bread, pasta, confectionery and other bread products per year, which is 10% less than in 2013. According to Shchedrin, bread consumption in Russia has been stable in recent years, but the consumption structure and assortment matrix are changing: for example, people are more likely to take pita bread, tortilla or tandoor cakes, before the pandemic, the consumption of bakery products in public catering grew.